Mission Statement: Orcas Choral Society shares a passion for mastering a variety of beautiful music that enriches the lives of singers, audiences, and communities through education, performance, and collaboration. 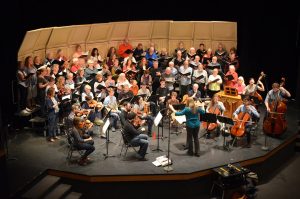 Tuesday evenings, September through May, the Madrona Room at the Orcas Center overflows with song as Orcas Choral Society rehearses for its winter and spring concerts.  A volunteer community choir ranging at any time from 50 to 70 voices, Orcas Choral Society regularly brings world-class choral music to Orcas and gives islanders a chance to sing it.  It’s been an Orcas institution since the 1970s and is growing strong.

Orcas Choral Society frequently performs with other Orcas musicians, from the Turtleback Brass to Martin Lund to the Orcas Boy Choir. And, it brings in regional musicians to the islands, notably the Skyros Quartet, for pieces that require a full orchestra. Choral Society regularly performs in the annual MAG (Music Advocacy Group) concerts, supporting music instruction in Orcas Island public schools.

Orcas music teacher Catherine Pederson and pianist Louellen McCoy established Orcas Choral Society in 1977.  The nascent group performed selections from The Messiah in 1977 and gave its first general concert in 1978.

The Orcas Choral Society board of directors wishes to announce that Marianne Lewis has resigned from her role as artistic director. We have truly enjoyed singing with Marianne and appreciate her tremendous devotion to the choir. We hope that her decision will lead to new opportunities for herself and for our singing community. We are now actively seeking a new artistic director.

“I love choral music and have loved making music together with all of you,” Marianne Lewis noted, “Our time together has left me with many wonderful memories, some of which are high points in my musical career.”

Marianne has been a part of the Orcas Choral Society for many years. Prior to becoming artistic director, Marianne accompanied the choir on harpsichord and organ for several concerts, including such works as Bach’s Coffee Cantata, Faure’s Requiem, Mozart’s Requiem, and Bach’s B Minor Mass. In fall of 2016 she became artistic director and led the choir in a holiday concert and spring concert each year, treasuring the collaborations with accompanying musicians – the Skyros Quartet, Turtleback Brass, Martin Lund, and other remarkable local musicians. Working with composer Morten Lauridsen for the Spring 2018 concert was a highlight for her.

“Marianne is a terrific choral conductor, and we are grateful for her leadership,” said Lynn Baker, OCS board president, “We’ll miss her!”

The Orcas Choral Society has stayed strong during the pandemic and under Marianne’s creative leadership we offered some singing events that enabled singers and community members to stay safe. The choir has reached out using computer resources for meetings and independent rehearsals with Choral Tracks. This past winter we performed on the Village Green stage and led caroling with the community as part of the Christmas tree lighting ceremony. On May Day Marianne conducted the choir in an open rehearsal of spring themed songs at the Emmanuel Episcopal Church labyrinth.

The Orcas Choral Society currently has 45 members and many alumni living on the island. Our motto is “Sharing Music is Our Passion”. We are very grateful for those who have supported us with their time, knowledge, and funds, particularly during these past challenging few years. 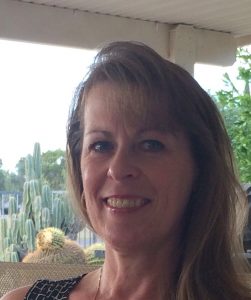 Marianne Lewis, organist, harpsichordist and choral director, has been Artistic Director and conductor of Orcas Choral Society since 2016.  She is also choirmaster and organist at Emmanuel Episcopal Church in Eastsound. She previously served as choir director and organist at St. James Lutheran Church, Portland, and Milwaukie Lutheran Church in Oregon. Lewis also accompanied Portland’s Oregon Repertory Singers.  She holds music degrees from Lewis and Clark College and University of Oregon. 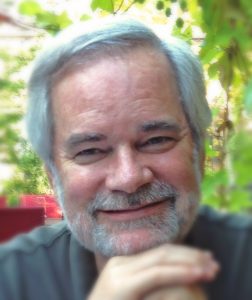 Roger W. Sherman directed Orcas Choral Society from 2010-2016. Associate Organist Emeritus of St. Mark’s Cathedral in Seattle, he has served as Executive Director of the Westfield Center for historic keyboard instruments. He produces and hosts the popular “Organ Loft” radio program. Sherman owns and operates The Gothic Catalog, based on Orcas Island, which records choral and organ concerts worldwide. He attended Oberlin Conservatory of Music and has composed five published choral works. In the 1970s, Sherman was Director of Music for St. Paul’s Episcopal Church in Milwaukee, Wisc. and taught organ and harpsichord at the Wisconsin Conservatory of Music.

Catherine Pederson is Founding Artistic Director Emeritus of Orcas Choral Society. As its Director for 33 years, she created a community of island singers who love music, are steadfast in friendship, and are committed to being a meaningful part of the community. Pederson is a founding member of the Orcas Island Chamber Music Festival Board and of the Music Advocacy Group (MAG). She maintains a private piano studio on Orcas. Before moving to Orcas, Pederson served as organist and children’s choir director at St. Thomas Episcopal and Central Lutheran churches in Eugene, Oregon. She taught middle and high school music in Eugene and on Orcas, and holds degrees from the University of Oregon and Pacific Lutheran University. She has participated in numerous choral workshops and festivals in the U.S., Canada, the Netherlands, and Cambridge, England.